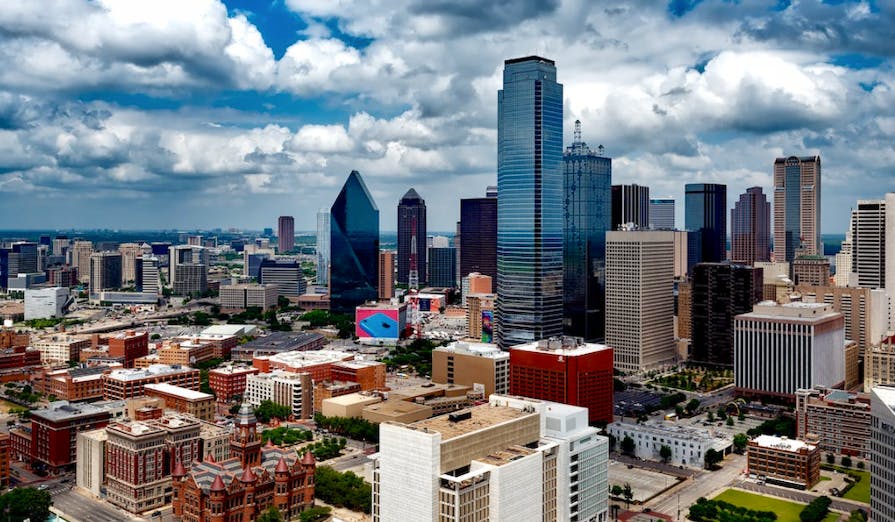 Dallas has a lot to offer both residents and out-of-towners. Keep reading for 4 interesting things to check out while visiting big D!

One of more well-known Dallas landmarks is the reunion tower observation deck. Once you’re up the elevator, the entire skyline is available for viewing. And in case you need some cardio, there is a staircase…with over 30,000 steps to the top!

There are public-use binoculars to look through, and of course a perfect backdrop for a selfie! According to locals, if you go on a weekday–you’ll probably have the deck mostly to yourself.

2. Try to keep up with “The Traveling Man”

This legendary trio of sculptures in the Deep Ellum neighborhood of Dallas was built by Brad Oldham and Brandon Oldenburg in 2009, and commissioned by DART, Dallas’ transportation authority, after they had to demolish a previous art installation to make way for rails.

There are three sculptures in total, that feature The Traveling Man waking up in the morning, playing guitar, and most famously walking mid-stride. It’s a bit out of the way from downtown Dallas, but definitely worth a visit if you haven’t seen it in person.

Spooky…the underground tunnels, officially named the Dallas Pedestrian Network, were built in the late 1960’s by city planner Vincent Ponte. It encompasses about 3 miles, and was originally built with the intention to combat the summer Texas heat! Funny enough, it was eventually the culprit of a massive slowdown in foot traffic in the 90’s, and local authorities decided to close off sections of it, and obscure it from being easily accessed in an effort to encourage residents to walk at street level!

There’s been some confusion, especially with the younger crowd, on how to access these tunnels–lucky for us, Alex Temblador from theculturetrip.com has cracked the case. Entrances can be found at:

Even better, here’s a map of entrances and routes, courtesy of Noah Jeppson!

A trip to Dallas simply wouldn’t be complete without visiting the nation’s largest arts district, the Dallas Arts District.

Attractions include the Perot Museum of Nature and Science, Dallas Black Dance Theatre, Dallas Museum of Art, and so much more. All in all, the district spans about 20 blocks and is definitely worth walking through if you haven’t before.

This neighborhood should not be confused with the also amazing Bishop Arts District, popular for its nightlife and restaurant scene.

In case you’re thinking of moving to the great city of Dallas, you’re in luck! We can help you with all of your Dallas and Texas Triangle real estate needs! Click the link below to get started with Flyhomes!