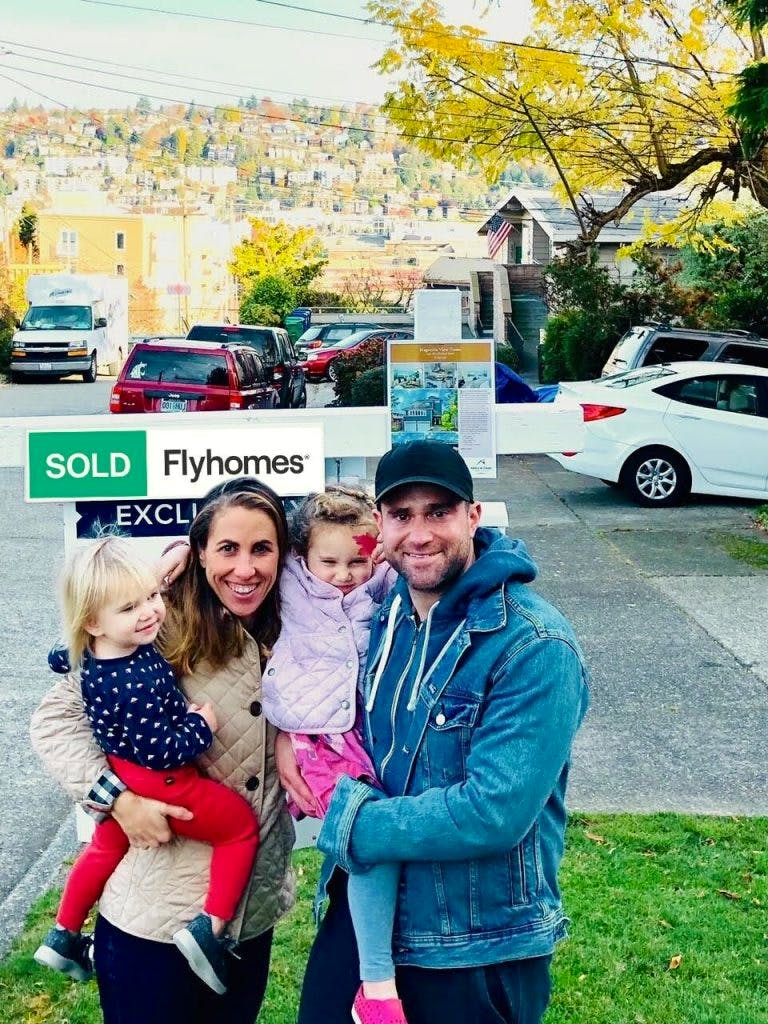 Back in 2015, Justin O’Neill and his wife Mia started on what proved to be a very challenging and very emotional house hunting journey in San Francisco that would last more than three years and include 20+ unsuccessful offers. Fast forward to the Fall of 2019, and the couple decided they needed both a change of pace and a change of scenery for their one year old and three year old daughters Ivy and Rowan.

Moving from San Francisco after 15 years brought with it a lot of change, but it also brought the prospect of getting on the right side of the real estate market and this time Justin was determined to have the odds stacked in his favor.

“We had lost a lot of bidding wars in The Bay Area to people who were able to pay cash, so one of the first calls I made when we were getting ready to move was to Flyhomes,” Justin says.

Through their Flyhomes agent, Jack Schwabeland, Justin and Mia won the first home offer they made in Seattle and they weren’t even the highest bid.

“We could not have had a better experience,” Justin says.

In fact, the process was so great that, in 2021, Justin decided to work for Flyhomes and became the Director of PR and Communications.

What made you decide to work for Flyhomes?

I felt Flyhomes was authentic. That helps in marketing and PR when you truly believe in what you’re selling and I thought this was a great time in my career. No one stood out that much to me or had that much appeal to me as Flyhomes. I believed in the model. I believed in the stories I’d be telling. It was a natural fit.

How is Flyhomes different from your previous work?

Part of the appeal of working on the agency side of public relations when I was younger was to get exposure to different brands. But, with the shift in consumer dynamics, individuals are expecting more of their businesses these days. There needs to be more. Companies need to be doing good in the world, the products need to be helping individuals, and doing what they say.

How did you get your first interview?

I stayed in really close touch with my agent, Jack Schwabeland. As soon as the head of PR and Communications came open he flagged it to me and it was meant to be.

They were really fun and enjoyable phone calls. Tushar Garg, the CEO, and I would sit there and geek out over what this company has meant to me and to him and his vision. They were the most pleasant interviews that I’ve been a part of for a long time because we had such a connection from the start.

What was it like working for a company you’d been a client for?

When I joined, I felt that I was already part of the company having gone through the client side experience. You truly build an emotional connection with the people helping you buy a home, and we came out the other side with genuine friendships and our kids knowing the names of the amazing team we worked with at Flyhomes; it was such a special experience.

What’s next for you at Flyhomes?

We’ve barely scratched the surface in terms of mainstream consumer awareness so my job is to continue telling our story and I feel lucky to be in this position because it’s a story that’s personally touched my life. Looking further ahead, the goal is to elevate Flyhomes and our brand to the point where we are so well known that it is objectively irrational for anyone not to work with us.