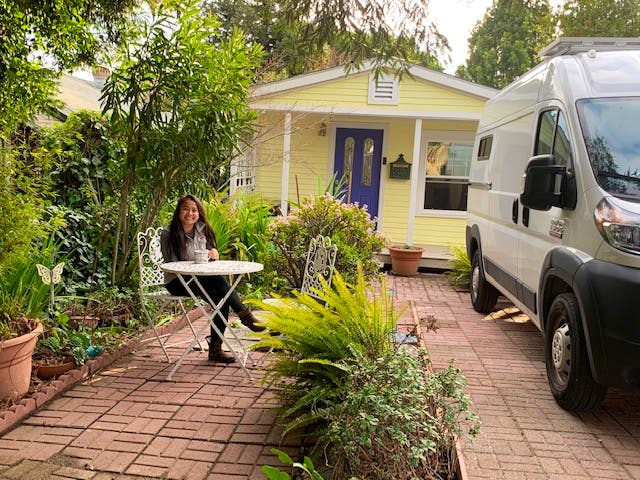 As a travel-loving mountain biker who has lived abroad for years and who moved across the country to the Bay Area from where she grew up in North Carolina, Blaise leads an adventurous life. She brought her curious and daring spirit to buying a home, too.

Having previously owned homes in North Carolina and Washington, Blaise wasn’t a first-time homebuyer when she came to Flyhomes. But she did have a new goal.

Inspired by a friend who was funding her travel-filled lifestyle by owning a duplex and earning rental income, Blaise set a goal to buy a home that had potential to rent out.

“My view of housing isn’t traditional,” she says. “I’ve traveled and worked all over the world, so I’m very flexible with living in different places. I’ve lived in North Carolina, DC, Austria, Thailand and other parts of Southeast Asia. As far as living options, I wasn’t looking to buy a home, build a family, and stay in that mortgage for 30 years. I was looking for a home for me, and it was a lot about my taste. I love A-frame houses.”

After living abroad for two years and then having a relationship end along with the Bay Area lease she’d been sharing with a boyfriend, she was living temporarily with her sister when she started considering buying.

She knew she didn’t want a roommate, which could be a financial issue in the competitive local market, particularly for a single person. On her path to buying a home she loves, Blaise says she was outpriced four or five times. But she kept going.

For flexibility, she wanted a place she could rent out short term or longer term when she’s travelling.

Location is important to her, particularly access to the outdoors and to an ocean, but she didn’t have her heart set on one neighborhood or even one city.

“I started looking with a traditional real estate agent, but the hard part was them understanding what I was looking for as far as an investment opportunity,” she says. “I also wanted someone with time and flexibility to show me homes all over the Bay and even out to Lake Tahoe.”

She was doing her own research about neighborhoods and felt like she had a better handle on fair prices for particular neighborhoods than her agent did.

While putting offers in, she says, “I would go with my gut. We put in some low offers for places that were overpriced. The sellers would say no and then drop their price and call us. I got tired.”

When she heard about Flyhomes from a friend, she decided to give the company a chance.

“As soon as I met my Client Advisor, Eric, we totally clicked,” she says. “He was going through his own reno. He had bought a house with his wife and was turning the basement into a rental. We had the same mindset on costs in the area and goals for the home.”

She and Eric started working together and Blaise appreciated having him as an advisor while she continued to be independent.

“I could still search the way I wanted on my own,” she says.  “I didn’t need to have Eric send me a listing, but I could forward one to him and he would have insight. He was always on point.”

They found a home that was about to hit the market in the Montclair neighborhood of Oakland near a mountain biking park. Eric wasn’t available to tour that day but scheduled a showing for Blaise with a Flyhomes Field Agent. Eric then went to the open house himself that weekend.

“He knew it would sell high because of the area and the rental potential,” Blaise says. “He set my expectation that my offer likely wouldn’t get accepted but we wanted to put one in anyway. Offers were due that Monday so we had to put something together. I went through pre-underwriting and all that in two days with Flyhomes Mortgage.”

Sure enough, Blaise didn’t get that home. And then the pandemic hit.

“When the pandemic happened, it was really hard to work remotely,” Blaise, who works for a tech firm in the city, says.

“My workplace has a high social culture,” she says. “My work friends are close friends, so it was hard to not go into the office.”

She’s not someone to dwell on issues, though. She found inspiration in her wanderlust.

“I thought, hey, I can go live anywhere now,” she says. “I got a van, built it as a camper van, and started exploring. My dad flew in to help with the van. All I wanted was a composting toilet, a bed, a mountain bike rack, and nice floors. He added a shower. I had to tell him to stop!”

Blaise felt some relief from the challenges of the pandemic once she started travelling in the van.

“Getting the van and house hunting that way gave me a view that you should pivot but not stop what you want to do,” she says. “I road tripped all through Sedona and Moab all the way up to the Pacific Northwest.”

Before leaving town, she found a home she liked in Fairfield. It was near a mountain bike park, had a great view, and matched Blaise’s style.

“It was a very rentable location,” she says. “Across from a country club. But when I started traveling, I disconnected myself from the Bay Area. I missed that opportunity, but it was good because I got to go places.”

Eventually, Blaise and her van ended up in Washington doing a mountain bike coaching clinic in the Seattle area.

“I like to browse houses everywhere I go. I really liked the North Bend area and the houses in Bellingham,” she says. “Eric introduced me to a Seattle Flyhomes Client Advisor, David.”

She learned about offering on homes in Washington from David, and was glad to learn that she could put in an offer with a maximum bid escalation.

She loved an A-frame home in the Issaquah area, only twenty minutes from Seattle.

“David said offers were due Monday and it had literally gone on the market that Friday,” she remembers. “The homeowners were retiring. I put in a bid but we didn’t win. It’s OK because the house needed a lot of repair.”

From there, David’s role expanded at Flyhomes and he stopped working directly with clients, so he introduced Blaise to his teammate Matt.

“Just like Eric, Matt understood what I wanted,” Blaise says. “He has a background with land sales and understood that I wanted to park the van. We looked at buying land, but he told me the permitting would take four or five years. It was great to have big ideas and be grounded with what’s realistic.”

“At one point, we even talked about looking for a castle after Matt stayed in one on a trip,” she says, laughing.

While traveling, Blaise was still watching listings in the Bay Area.

“I was keeping in touch with both Matt and Eric,” she says. “I was willing to go wherever a house that I wanted came up first.”

Soon she saw a listing in Benicia for a one bedroom, one bathroom cottage with a separate studio with a full bath that could be rented out, and a courtyard where the van could park. The listing went pending, but later she noticed it came back on the market.

“I saw that online and asked Eric to schedule time to see it,” she says. “When I came out, I was like ‘I’m buying it. Eric came out a few times to see the house and get a better idea of what it was. It’s an older home, built in the 1940s. It has upgrades that are great but needed some changes.’”

She and Eric put in a strong offer and, two weeks later, Blaise had her keys to her new house.

“We offered below asking, which is unheard of in the Bay Area,” she says. “But we got it with the Flyhomes offer. The seller had a backup offer come in after ours was accepted. It was over my price, but the competitive Flyhomes offer program and closing faster kept us more competitive. I also met the previous owner after and she lived there for a long time. I think she felt good giving someone else a forever home.”

Blaise is excited to make tweaks to the home to make it an even better fit for how she wants to use it.

“I’m renovating,” she says. “I’m redoing the courtyard to continue the driveway inside the gate, so I can park the van inside and make it part of the house, and rent out the studio. My third bedroom is the van!”

There are a lot of homebuying lessons to learn from Blaise, but perhaps the most important is this: look at buying a home as a big adventure! Following a path, even a crooked one and even if you’re not sure where you’ll end up, is a risk worth taking. Trust your gut along the way and you’ll end up in a home you love.