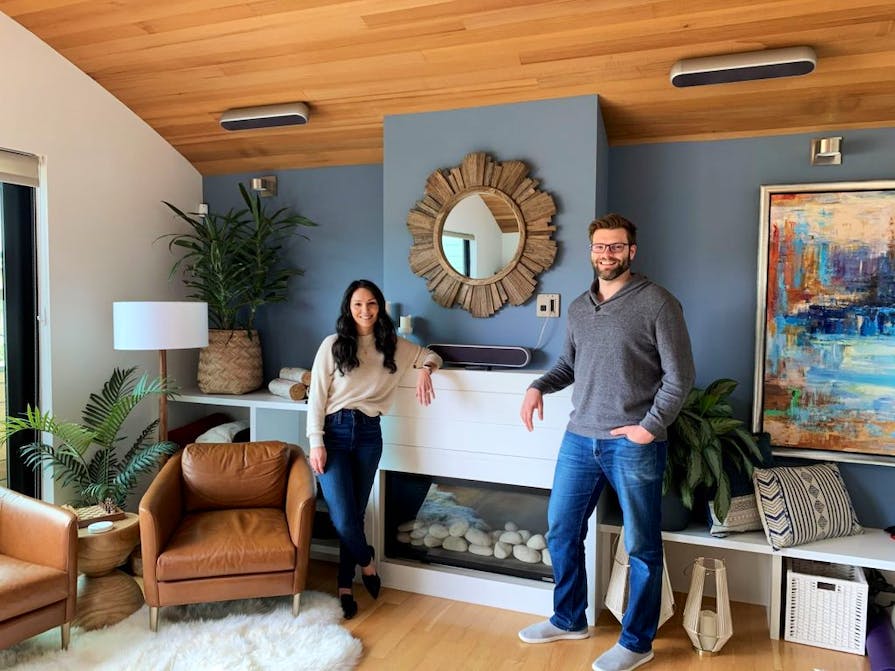 First-time homebuyers Shane and Sierra met in 2012 at a music festival Shane co-founded with friends. Both working in tech, he lived in San Francisco and she was in the South Bay. Eventually, they moved in together in the South Bay.

“We did it backwards,” Sierra said. “Usually people live in the city, then move to the suburbs. I had never lived in the city and I had a moment where I thought we should do it now, before having kids.”

So they rented a one-bedroom apartment in SoMa near the ballpark, choosing the area for its convenience to the train because they were both commuting to work at Box in Redwood City.

They loved being in the city but wanted a neighborhood with more to do. Planning for the future, they created a spreadsheet to plan when to buy a house (and even when to have kids!).

“We did the analysis and realized we could afford a house. We had some investments and stocks that made it feasible,” Sierra says. “We started to look around online to explore, get a sense for what the market was like, and what neighborhoods were like.”

“Once we started going to look at places, we became more invested in the idea of buying,” Shane says. They started spending every Sunday house shopping.

On top of their wishlist? A big, open room for entertaining, lots of natural light, and newer construction to avoid thin walls. Initially, they prioritized how much they liked the house itself rather than a short commute or a completely walkable neighborhood.

“We thought we wanted Portrero Hill,” Sierra says, “But places don’t come up there very often and, in hindsight, that’s not where we want to be.”

Soon after they started looking, Shane saw an ad for the Flyhomes Cash Offer program.

“The mention of ‘cash offer’ caught my eye. There were rumors that IPO money would start to free up in the tech world  and that money would get out into the housing market soon,” Shane says. “We knew we’d be going against competitive cash offers, so we got on the phone with Sassan at Flyhomes.”

“The main hesitation for us in buying a house was the mental stress of competing in a real estate market like SF,” Shane continues. “So knowing we had the cash offer in our back pocket put us over the edge from thinking about it to doing it.”

The couple says that they appreciated the team of specialists at Flyhomes, and the convenience of scheduling home tours via the mobile app … and they toured a lot of homes!

“We saw 40 houses and I didn’t have to call a single person,” Shane says.

“When we really started getting into the search, the convenience factor was huge,” Sierra adds. “It’s easy to add tours through the Flyhomes app versus a traditional agent, where you’re competing for their time on Saturdays or Sundays.”

Shane and Sierra’s goal in touring homes was to learn about different neighborhoods.

“I’ve lived in SF on and off for 10 years, I thought I knew it well, but I learned a lot through touring in different neighborhoods ,” Shane says.

For Sierra, priorities shifted over the course of their house shopping.“We were getting to know the city, and our nice-to-haves versus need-to-haves changed over time, just by seeing different places. We were set on very specific neighborhoods at first, then realized we should open it up.”

They used the free Lyft rides Flyhomes provides for clients, and got to know several Flyhomes Tour Agents over days of touring as many as eight homes in a row.

Seeing so many homes made them confident in what they were looking for. Sometimes, they’d only be a few steps into a home before knowing it wasn’t the one for them.

“The things that are important become really clear,” Shane says. “A big open floor plan with shared common space  was a must-have for us. Location, including proximity to restaurants and convenience shops, also became important to us as well.

Ironically, one of the homes they didn’t win was on a street that shared their last name. Not winning a home you love is difficult, but they moved past the disappointment.

“We fell in love with the first one,” Shane says.”but after spending more time in other neighborhoods,we’re actually really glad we didn’t get it.”

“Once you get emotionally invested in a property, you start picturing yourself in the neighborhood and get really excited,” Sierra says. “So it can be discouraging if your offer isn’t accepted after all the energy you’ve put in. It was interesting how emotional of a process it was as a first time buyer.”

About three months into looking, they saw a listing for a home in the Mission that they got excited about. At first, they thought it was out of their price range, but they decided to see it anyway.

It turned out the Mission was the area they’d been looking for, and the house felt right.

“We texted Sid within 15 minutes of viewing the house saying we wanted to make an offer,” Shane says.

It just so happened that the timing was perfect. Three other potential buyers on the home had backed out the week before.

“Having the cash offer boosted our confidence in coming in with a strong offer without feeling like we had to blow it through the roof and overpay,” Sierra agrees. “It gave us the competitive advantage we needed for the buyers to accept the same day.”

“We were only in the house for about 15 minutes before we bought it,” Shane says. “We didn’t even realize what a great view it has from the rooftop deck!”

In addition to that rare outdoor space (where they now have a fire pit, plants, and a sofa), they love their high ceilings. In the living room, the entire ceiling is arced with rich wood panels and skylights. They not only got the big, open great room they wanted … they got a very special one.

Since moving in, Shane and Sierra decorated using Modsy and are happy to host their friends and family, just as they’d imagined three months earlier when they started their home search.