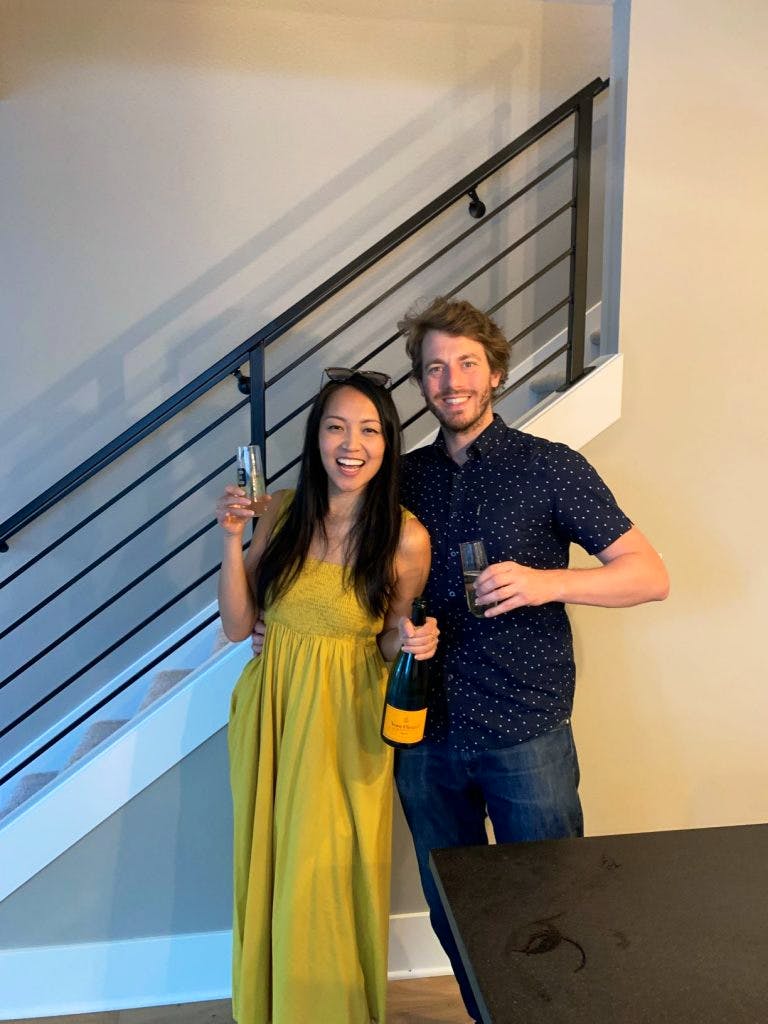 There’s an important and cuddly reason Vanessa and her partner, Matt, started thinking about making the jump from renting in the Pearl to buying a house in Northeast Portland: their energetic Goldendoodle puppy, Penny.

Another reason: the pandemic threw everything into question.

“We were totally fine in an apartment,” Vanessa says. “I love the concrete jungle and thought I’d be a renter for life. But with eight flights of stairs every 20 minutes to take Penny out … when everything turned upside down, we thought, ‘maybe we should do this.’”

The Pearl was a great location for the couple. Matt had started Greenleaf Juicing Company (which he’s since sold to work on his new concept, The Celery) as a food cart business that he’d grown to multiple locations and he was part of the local business association. Vanessa had a great commute to her job as an Account Manager for companies including Nike.

Vanessa also runs foodbellypdx with her sister, Vicki, exploring food and more all around the city and beyond.

“Food is a huge passion of mine,” she says. “I love anything to do with food. It’s essential. It’s how you share together and part of why you want to have a home, to dine together as a family.”

The sisters were born and raised in Vancouver, British Columbia, and are “freakishly close” without other family in Portland. They love exploring in their own backyard, which has led to collaborations with organizations like Travel Oregon.

Because food and people are both important to her, a great kitchen was at the top of Vanessa’s wishlist.

“I love having dinner parties and miss them right now,” Vanessa says. “Our apartment was nice but the flow of the house had people in the living room when I was in the kitchen. I wanted an open concept space with a bar where people could sit.”

Also on her list: a modern home that didn’t need a lot of fixing up, a gas stove to amp up her cooking and inspire her blog followers, and parking to avoid having to trek up Portland’s hills after parking blocks away.

Vanessa started her search by downloading the Zillow app and choosing some homes to tour.

Because she and Matt made the decision to buy suddenly and she was still managing her full-time job along with foodbellypdx and Penny, she didn’t feel as if she had the luxury to spend a lot of time searching.

She didn’t yet have an agent to work with and started getting phone calls from people she met as she looked at houses, but felt stressed by all the phone calls.

At one tour, she met Natalie, a local Flyhomes Agent.

“Natalie just sounded really different,” Vanessa says. “It was great because she didn’t give me pressure to buy. She really understood what I was looking for.”

While Vanessa liked using an app to find homes, she’s grateful that her pandemic-times search didn’t have to be completely virtual.

“I’m a face-to-face person or a text person,” says Vanessa. “The video and virtual tours just didn’t do it for me.”

The guidelines for real estate activity while stay-at-home orders were in effect varied state by state. In Oregon, Vanessa was able to tour with a mask. She remembers hearing that some homes wouldn’t allow tours unless you were not only pre-approved for a loan, but ready to make an offer.

In total, Vanessa and Matt saw seven or eight houses including a few others in Northeast Portland, where her sister Vicki lives.

“My sister has a house that she’s done a lot of work on and it’s great,” Vanessa says. “It feels so classic Portland but they’re also always fixing things. We wanted something newer.”

She ended up finding a brand-new house across from a park that’s perfect for Penny.

“When we walked into this one, we realized we could start a family here,” Vanessa says. “We can have people over someday. And there are endless possibilities with the look and feel of the house.”

Vanessa, Matt, and Natalie decided to give the sellers a traditional offer rather than a Flyhomes Cash Offer because the home had been on the market for some time and didn’t have many competing offers.

The home was one of two built at the same time and people were living in the other one, so Natalie dug in to understand why the one Vanessa wanted hadn’t sold yet and what kind of negotiations had been possible with the home’s seller, who was the builder of both homes.

“Natalie went the extra mile to make friends with the neighbors,” Vanessa says. “They told her they’d been able to negotiate air conditioning in their contract. So I was really grateful to have that installed in time for the summer heat!”

As a new build, the home didn’t come with appliances. Keeping those asks out of the offer helped them land a deal below asking price, saving money to buy their pick of refrigerator, washer, and dryer.

While the home didn’t come with appliances, it did come with warranties.

“If the plumbing has a leak in the first year, we can call the builder, which is great coming from renting,” Vanessa says.

Other challenges for Vanessa stemmed from not growing up in the US. Canadian processes have some differences to American ones.

The speed and amount of paperwork to buy a home were also stressors.

“It’s kind of a huge accomplishment,” Vanessa says. “Wow, we did it together. This would not have been possible without everyone going to bat for us.”

Matt used his expertise running a business to make moving during the pandemic go as smoothly as possible.

“We didn’t have family in town to help us move” Vanessa says. “So it was really stressful. It was also such a collision of things because our moving date was June 19 and we were part of the peaceful protests. We ended up closing a day earlier on June 18 to align with the county’s observed Juneteenth holiday.”

They found movers to help with furniture and heavy items and, after a long day, got moved in.

“The best part of buying this house was just popping the champagne and having it spill all over the ground,” Vanessa says. “It was a moment!”

Congratulations, Vanessa and Matt! We’ll be watching to see what you cook in your beautiful new kitchen.