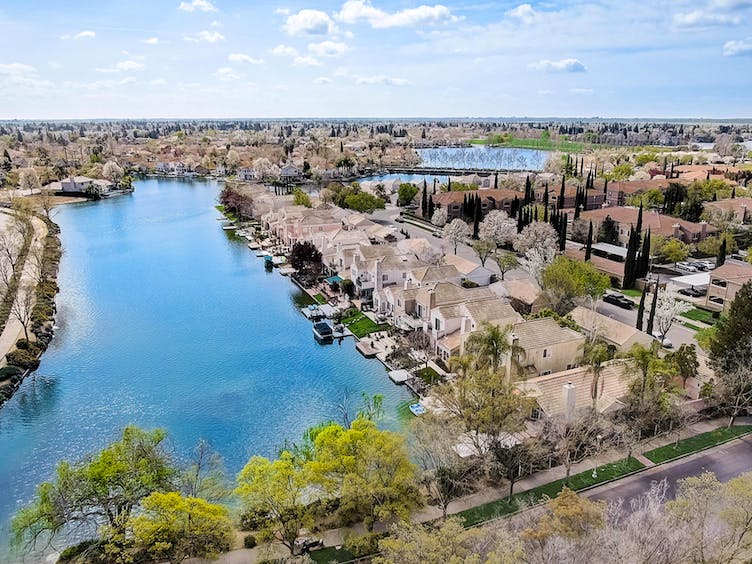 Elk Grove is due south of Sacramento, along the Sacramento River and I-99. This lush suburb of Sacramento lies at the edge of the urban center, where wineries and green spaces begin to take over. You’ll have good schools, beautiful scenery, and a convenient location all within 20 minutes of Sacramento, and just over an hour to either the Bay Area or Lake Tahoe.

Elk Grove, California, as we know it today is relatively new. Not incorporated until as recently as 2000, the city began as a train stop along the Central Pacific Railroad. Named after James Hall’s Elk Grove Hotel, it remained an agricultural community until the 1980s when city planners developed along the outskirts of Sacramento when Bay Area commuters began to move in. Shortly after that, the city became one of the fastest growing in the US and it continues to attract people looking for quality and value in their homes and lifestyle.

It’s as diverse as the surrounding region

As of 2020, the population of Elk Grove was roughly 176,000, of which 34.1% were white, 28.8% were Asian, 18.5% were Latino and 11.5% were African American. Though the population of nearby San Francisco is much larger, the demographics are comparable so residents of Elk Grove are part of an equally diverse community as their more urban counterparts.

Elk Grove households make around $95,000, compared to nearly $120,000 in San Francisco. This keeps home prices reasonably affordable while maintaining Bay Area standards for its quality of life. At the last census, over 90% of Elk Grove residents had a high school education or higher. Nearly 40% have a bachelor’s degree, which is higher than the California average.

The schools are above average

The Elk Grove Unified School District is consistently ranked as a top district, with some of the best schools in California. According to Niche, the district is the second most diverse in the state and is one of the top 25% highest performing districts. It’s no wonder the schools are so good. With an average teach-to-student ratio of 23-to-1, the Elk Grove district boasts a 90% graduation rate.

Employment is high in Elk Grove

Cupertino is not the only place to find good jobs in tech. Even after Apple moved much of its production overseas, the company converted its old factories near Elk Grove to customer care centers. That’s why the unemployment rate in Elk Grove is at just 6% while the job growth rate is expected to hit 37% in the next few years, according to bestplaces.net.

Outside of Sacramento, Elk Grove’s climate is not all that different from temperate Napa or Sonoma. But its location east of the Bay Area, keeps its local wine growing a secret from tourists. Not far from the Sierra Nevada and in the Central Valley, Elk Grove is surrounded by California’s lush natural beauty.

There are no shortage of amenities

Elk Grove has everything that you’d want from an urban town, from supermarkets and grocery store chains to hole-in-the-wall restaurants and farmers markets. Old Town Elk Grove is your destination for shopping local and enjoying a craft beer.

Housing competition is more manageable than nearby areas

It’s still competitive to buy a home in Elk Grove, with sale prices topping 103% of list prices and homes selling in less than two weeks. But compared to the Bay Area, that’s downright slow-paced. The average home sold for $630,000.